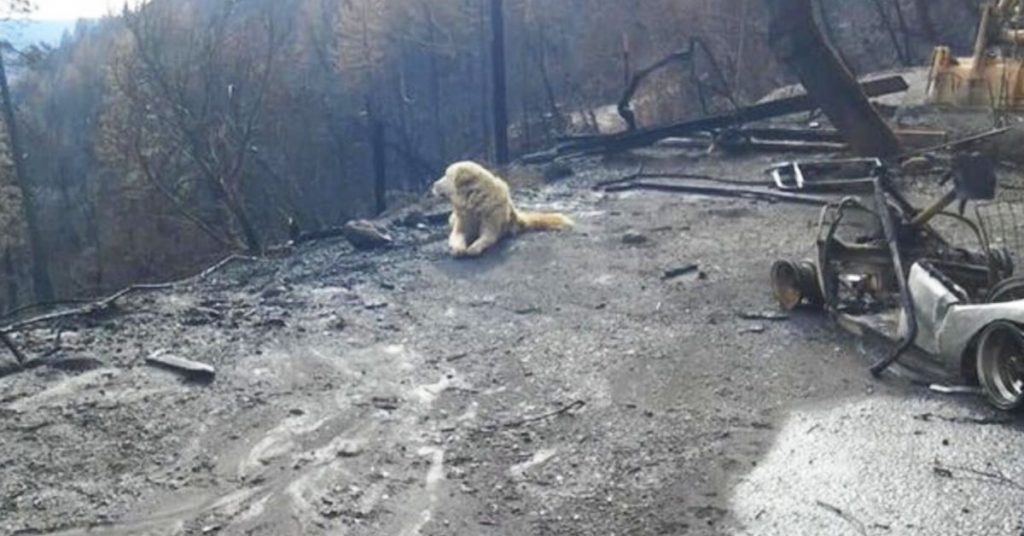 The dictionary defines the word “loyalty” as a noun that means “a strong feeling of support or allegiance.”
But here is the real face of loyalty: An Anatolian Shepherd dog by the name Madison waited for close to a month for its owners to return to the remnants of their destroyed home following a fire that reduced their home into ashes in Northern California.
The fire which started on Nov 8 saw Madison stay at, or close, their home which was totally reduced down into ashes.
According to a Facebook post by Shayla Sullivan, a volunteer with K9 Paw Print Rescue, Madison waited for the owners as if he was protecting for their home.
The California Camp Fire which spread through 153,336 hectares killed at least 85 people and destroyed more than 18,800 homes and businesses. Although some were rescued, others had to wait for the owners who unfortunately could not make it through the flames.
According to the Sacramento Bee report, desperate evacuees pleaded for the rescue of the animals that were left behind.
The San Francisco Chronicle reported on Friday last week that even the Gayford Family didn’t manage to get to their Paradise home when the fire first erupted. This means that even Madison and his brother Miguel were left to fend for themselves.
Sullivan who was part of the K9 Paw Print rescue team found Madison in the Citrus Heights neighborhood and managed to reunite him with his owner who was still sheltering in a temporary home. It was quite difficult to capture Madison, Sullivan posted.
Sullivan spotted Madison a couple of times in the canyon, guarding some area. She posted on Facebook that she was of the stranger. She could leave food and water for the loyal dog. After meeting Madison owner, Andrea Gayford, she placed a piece of her clothing near the home.
Another Facebook post by Sullivan stated that she had the idea of placing a piece of clothing that would smell like her. She had hugged Gayford to keep Madison’s hope alive until they could reunite.
Gayford was allowed on Thursday only to find there was nothing left behind.
All she met was Madison.
Madison was still guarding what was left of his home, and couldn’t despair for his people. For close to a month, Madison didn’t despair through the storms of fire.
Sullivan and Gayford shared the story of Madison’s loyalty on ABC’s KXTV-10 Connect in a tearful reunion.
Through tears, Gayford said that she could never ask for better animals and that Madison was her best friend. She reckoned that Madison expressed loyalty of hanging in through the worst of circumstances and being there waiting.
Madison was given his favorite treat of Wheat Thins. He grabbed a handful of them.
Gayford said that it is instinctually the job of dogs to watch the flocks and that we happen to be part of them. “It was a comforting feeling,” she added.